For some time now, I have had an intimate relationship with a neodymium magnet. What I mean by this is that I have said magnet sitting within the flesh of my left ring-finger.

In this post I hope to illuminate why and how I got to have this little gadget and maybe even answer a few other questions that might arise.

The first time I heard about magnetic implants was in a talk by Quinn Norton, entitled 'Functional body modification', which was held at the 23rd Chaos Communication Congress - or for me rather a recording of said talk which I watched some time in 2007 or 2008. In this talk Quinn addressed topics such as the surplus in stimuli caused by genital piercings, the joy of being able to skip a nights worth of sleep with Provigil/Modafinil and one of the focal points of the talk: her experience with getting a neodymium magnet implanted, which enabled her to sense magnetic fields.

Quinn also pointed out a flaw the implants had: The protective silicone coating, which shielded the magnet from the hosts immune system, was susceptible to damage. What happened to her was that the coating broke, practically laying the magnet bare which in turn meant that the immune system began attacking and breaking down the implant, effectively pulling it apart. As if that wasn't bad enough the dispersed magnet could not be removed until it reassembled itself (it's a magnet, remember?).

I was disappointed seeing such an amazing concept being hampered by a flaw that ugly, so I disregarded getting one done, at least for the time being.

Fast forward to 2010. Hanging out in #biopunk, I one day clicked a little link that turned out to be quite different from the usual ones leading to articles about DIYbio projects and the like. This link went to sapiensanonym.blogspot.com, a blog maintained by an individual calling itself 'Lepht Anonym', a drug-addicted, self-mutilating, gender-neutral wetware hacker. So far, so awesome. But yet even more awesome this individual was able to quickly dissipate my doubts about getting an implant done since the problem with the silicone coating was only an issue with early prototypes and had been nonexistant for years. Lepht could also tell me a few other things, amongst them a piercing studio here in Germany, namely TRUST in Mannheim, that offered this kind of body-modification. When I went to the site of that piercing studio there was one post roughly informing the reader that Steve Haworth (who invented this type of bodmod, besides others) was going to be there doing bodymodifications in September along with the possibility to ask for an appointment.

Since September was the month I would be getting my first full-time salary, the rest practically did itself: Taking a few days off, traveling through half the country by train with my fellow nerd cypher and finally getting acquainted with my new neodymium friend.

The procedure was simple enough: cut open the finger, cram in the implant, stitch it, done. This was done in a very professional manner by Steve and a local piercer (who also does the implants himself) named Marcus.

They took a few pictures, including - at my request - a close up of my finger being cut open. Sadly I only received one picture of after the procedure.

After a quick stop at the local hackerspace (the magnificent RaumZeitLabor) we went to cyphers place (~60km from Mannheim) where I had my first experience with electromagnetic perception: I could feel the oscillation of the transformer used to power the halogen lamps in his room. OH THE JOY!

A few weeks later I removed the suture and all was good.

At the time of writing this, I have had this implant for roughly one and a half years and haven't had any problems or inconveniences because of it. 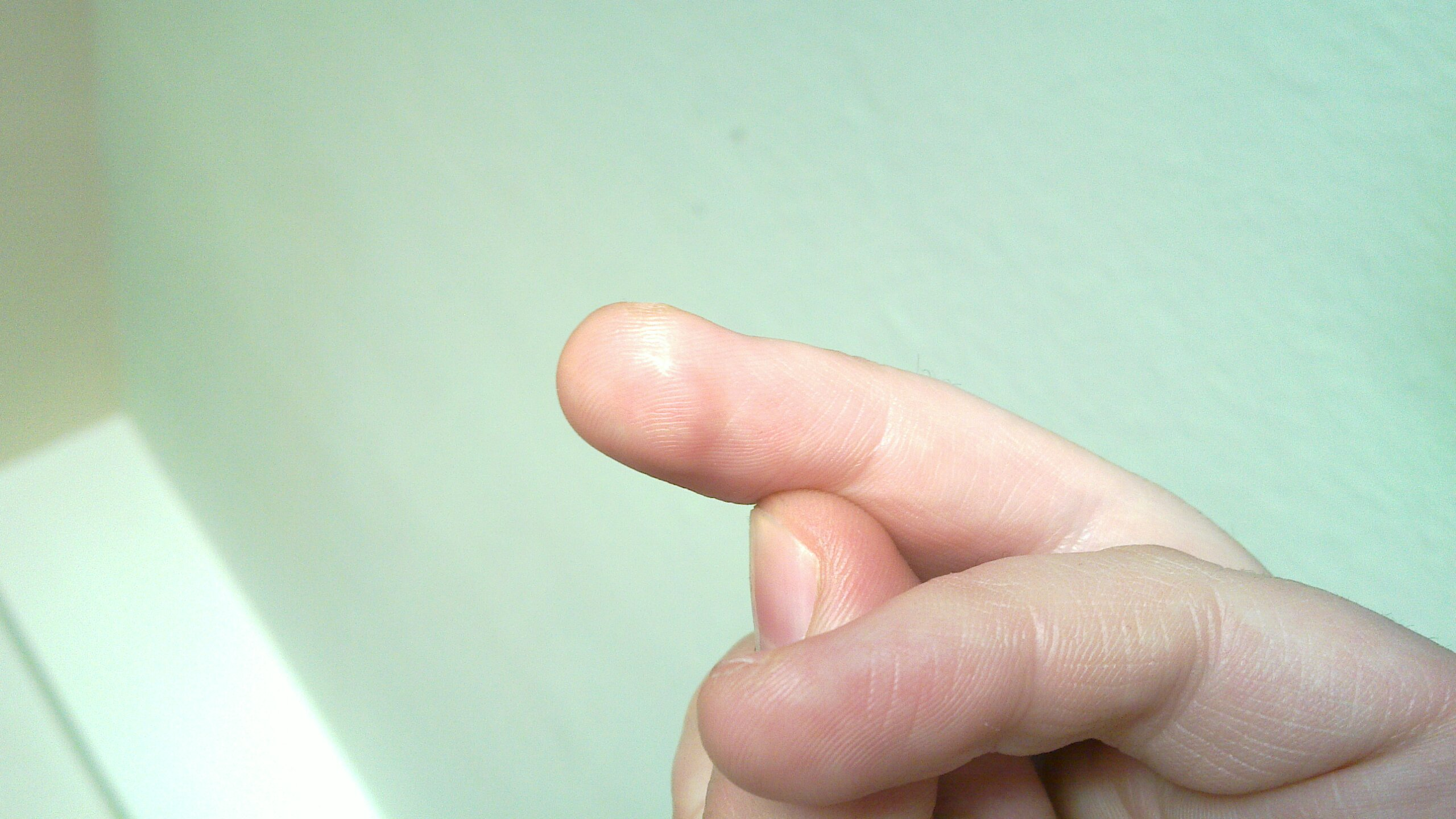 The scar is mostly visible as a little part of skin that reflects more light than the rest of the fingertip.

I don't delete banking cards or hard-drives (haven't tested floppies - yet) and I don't trigger the alarm systems in the supermarket. I can type without any problem or loss of speed (and being a nerd I type A LOT).

I have, however, been asked 'Why?' a few hundred times. When I then explain that this bodmod enables me to sense electromagnetic fields and that I got it purely out of curiosity, people always seem to fall into one of two categories: Those who go "That sounds awesome, tell me more." and those who go "Does it help you at your work? No? Then I can't understand how you could do that to yourself, getting no advantage at work and stuff…". To the latter, I have a question:

What is wrong with you that something is right if you do it for your job but wrong when it is for yourself!? Please have a go at repeatedly stabbing yourself in the face with a spork.

Sadly, I didn't gain any superpowers either. Unless you count sticking paperclips to my finger as one. Neither did it introduce any other kind of profound change to my life.

One downside of having the implant is that once you have it, you won't be able to get MRI'd without previously removing it, since the MRI would just rip the implant straight out. As far as I know you won't get MRI'd when you're unconscious so unless you suspect you have cancer, you should be good to go. Keeping a little card that informs about the implant in your wallet next to your health insurance card might be a good idea, though.

If there was one profound experience I had with the implant, it was "Ooooh - fridges are held close by magnets!" or maybe "HOLY FUCK - THIS THING IS SPINNING INSIDE MY FINGER", the latter being quite the surprise for me. 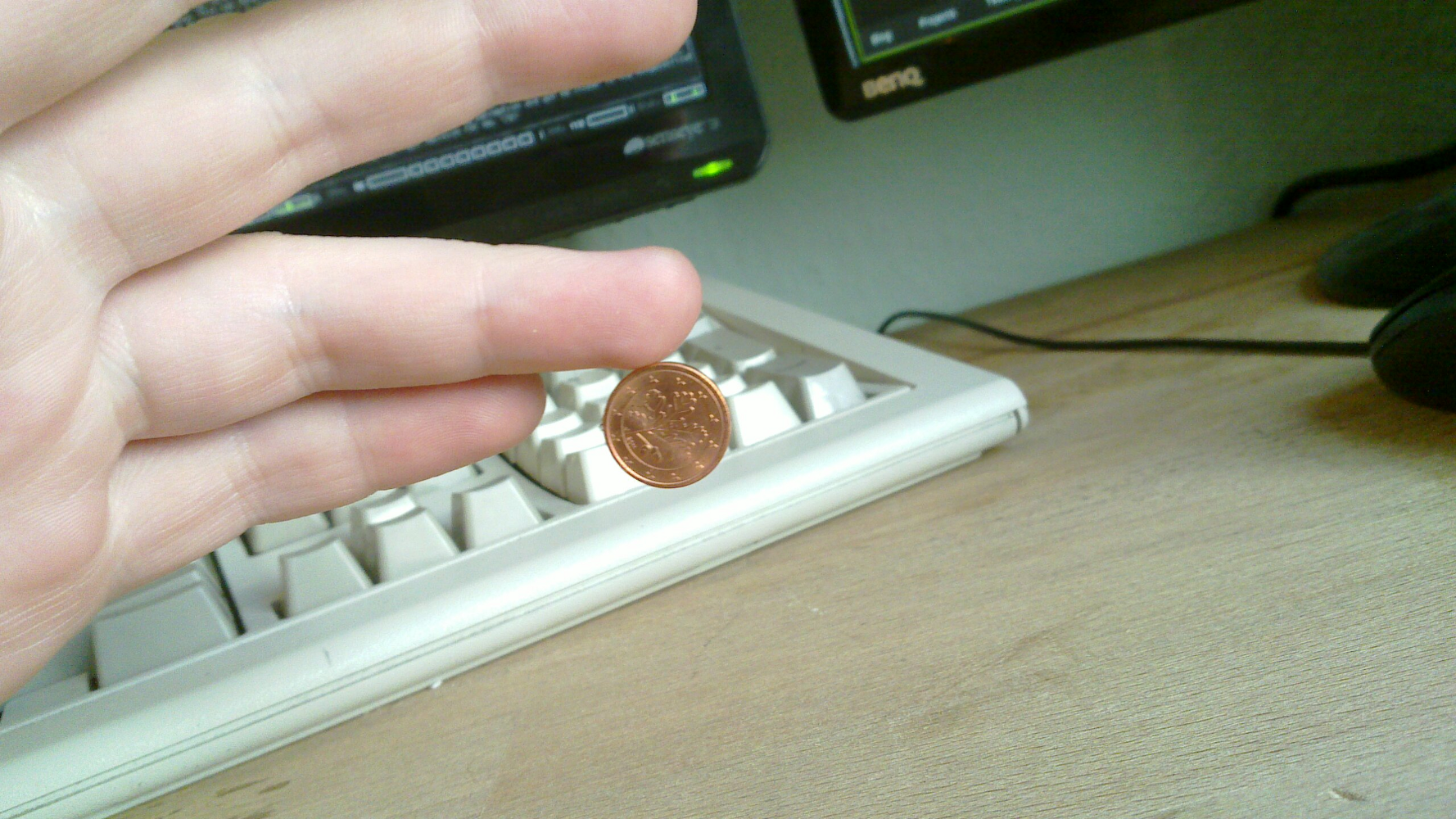 Picking up small objects is possible, but not of much use as anything but a bar trick…

There are some things though, that I have not seen covered in other texts.

For one I have had a few 'phantom experiences', especially in the first few weeks and months. I felt a very light tingling, just as if an AC current would stimulate the magnet, but so weak that it was on the fringe of perception. This even happened on other fingers or even my other hand, which made me realize that in fact there was no electromagnetic stimulation.

The sense in itself is felt through the movement and pull of the magnet. When I feel a static field, I only perceive the pull that is exerted on the magnet. When I feel an oscillating field, I feel it vibrate within my finger. This is much more noticeable, in fact if I would hold out my finger in front of the electric motor of a desk-fan you could put your finger on mine and feel it vibrate as well. If you wish to try it out yourself without cramming strange things into your body: There is a way to emulate part of it

Another thing worth knowing: You can handle large speakers without ripping your implant out. I have touched the magnets of multiple large speakers with single woofers up to 15"/38cm. While it can get quite sticky I was always able to get my finger off painlessly so far.

In closing, I can say that I am very happy that I actually pulled this off and didn't chicken out (unlike other people - YES, I'M LOOKING AT YOU, ADISBLADIS!). I would, maybe even will, do it again. My little neodymium friend widens the bandwidth of my perception and got me closer to the bodymodification and grinding / practical transhumanism communities.

Getting this implant done was definitely the right decision for me.

Note: This article was rescued from the backup of my old lisp site and should probably be updated.

Errata: To the best of my current knowledge you actually can get an MRI done.